In the second part of The Journey I would like to review jigsaw puzzles of another Turkish manufacturer – AnaTolian. This time I will take a closer look at the work of Dominic Davison.

If you haven’t read the first part of the series, it’s here.

Dominic Davison is a digital artist based in London. His artwork is published in magazines such as ‘3D Artist’ or ‘Advanced Photoshop’. His graphic designs are printed on jigsaw puzzles of many manufacturers. Let me just mention Anatolian, Castorland, Connex, Clementoni, Educa, Eurographics, Falcon, Grow, Jumbo, KS Games, Ravensburger, Schmidt, Springbok, Trefl, Wentworth. Quite a lot, right? I was able to find boxes containing from 40 to 6,000 puzzle pieces.

What can we find in Davison’s portfolio? Cabins and rural landscapes as well as streets of Mediterranean cities due to his love of southern France, Italy and Spain. Some people will be charmed by it, others will find it a bit too sweet. Either way one cannot deny the fact that he is as recognizable as Thomas Kinkade, Aimee Stewart, and Josephine Wall.

Let’s focus on ‘Seine Sunset. AnaTolian 1,000 pieces puzzle’. The box dimension is regular 9.8 x 14.2 x 2 inch which makes it only a little smaller than Art Puzzle. The top cover of the box has a structure of linen and the picture takes up most of the box. The picture is not covered with any prints, the producer’s logo is placed below the picture and we have the amount of the elements together with the name of the series (‘Puzzle of the World’) written on the left side of the picture. It all makes the picture a bit smaller compared to Art Puzzle. However, I believe it won’t bother anyone. The side of the box contains the logo, the picture, the title, and information about the dimension of the complete picture which is rather typical. 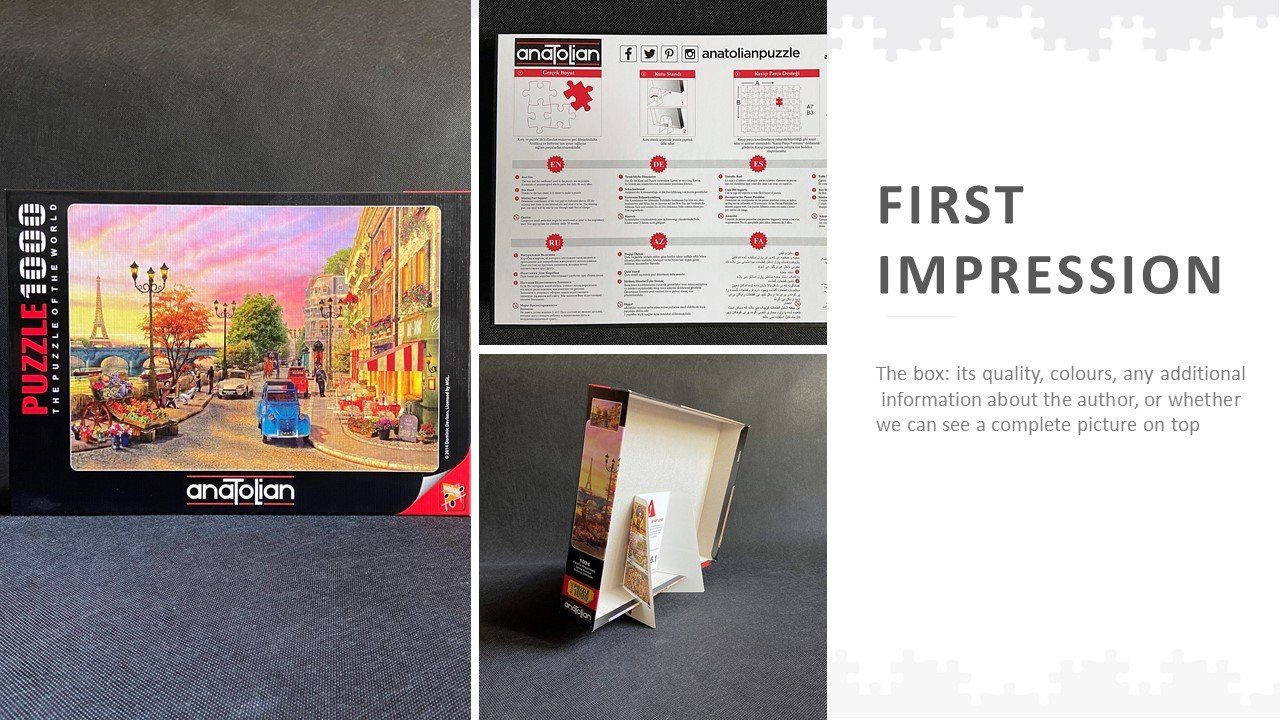 Inside of the box there is a plastic bag with puzzle pieces but also a puzzle box holder. It is a properly cut and bent cardboard in the form of a trapezoid which also contains a special code for a complaint procedure. In my opinion this is a nicely done advertising material.

I sieved the elements through the kitchen strainer to see if there is a lot of dust. There was almost none comparing to Art Puzzle which is only another feature of AnaTolian jigsaw. 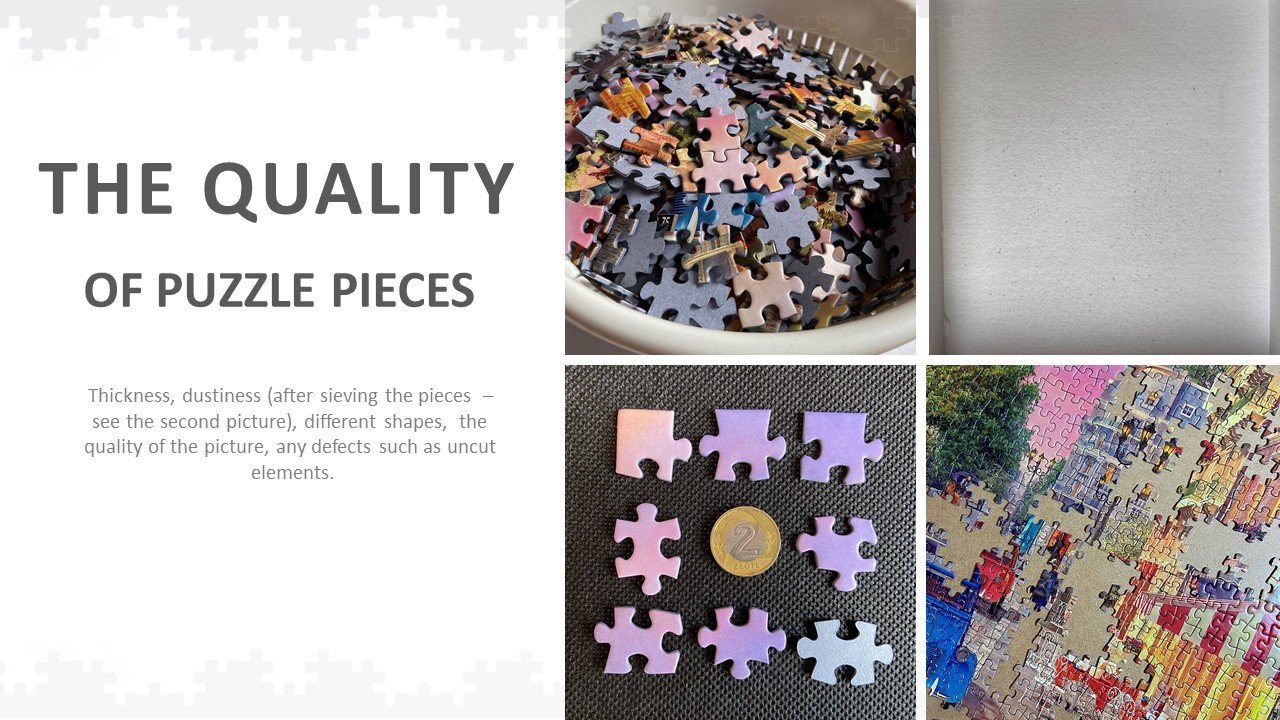 AnaTolian uses a regular cutting and the elements form a typical net. Pieces have standard shapes, each one usually has two tabs and two blanks. The thickness is similar to Art Puzzle. However, there is no uncut elements and almost no delamination of the pieces which makes me positively surprised. The elements fit well, although it is still impossible to move the whole picture in between places. But it should be easy to move some bigger parts of it.?

The colours of the print are intense and very clear but the surface is smooth which causes more light reflection.

You may get the impression that I wasn’t thrilled by ‘Seine Sunset’ as much as by ‘Frida’. It’s just one of many landscapes with slightly exaggerated colours. A typical Paris picture: the Eiffel Tower, cafés, stalls, artists painting on the street. If it wasn’t for the empty coffee tables, one could say it’s an almost perfect world.

However, I enjoyed doing this jigsaw even more than I expected because of its good quality and the fact that it wasn’t too difficult. 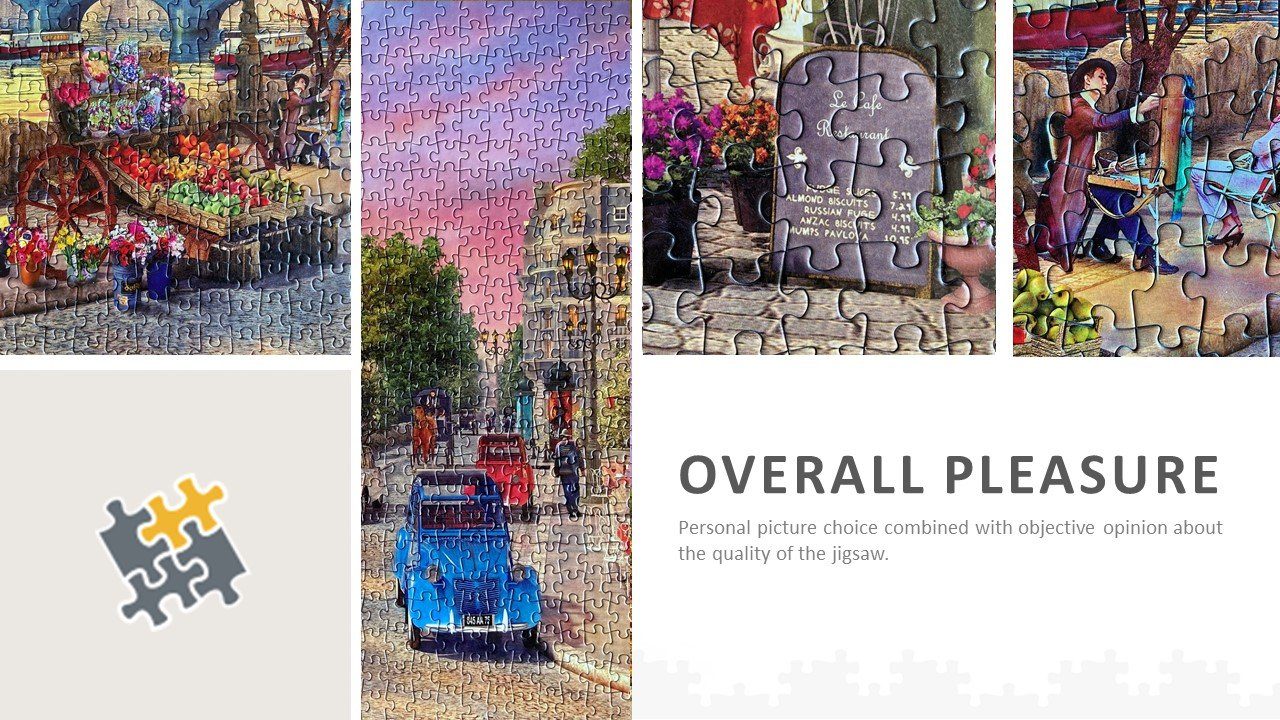 I don’t usually sort puzzle pieces very thoroughly. I managed to separate the frame, the sky, plants, the street, and other small elements. Assembling the sky went smoothly because there was different shading of colours. It all makes the 1,000 pieces puzzle boxes neither too difficult nor too easy to do.

I do not pay much attention to the time I devote to a given jigsaw puzzle. I don’t compete with anyone so I take my time. It probably took me two evenings to complete it. I loved the little details, such as facial features of the characters, readable menu board outside the café, and diverse plants. You could actually relax doing this picture.

AnaTolian belongs to Turkish Perre Group which aspires to be a global brand. They offer puzzles from 260 to 3,000 pieces so if you are an amateur or a pro, you will still find something for yourself. 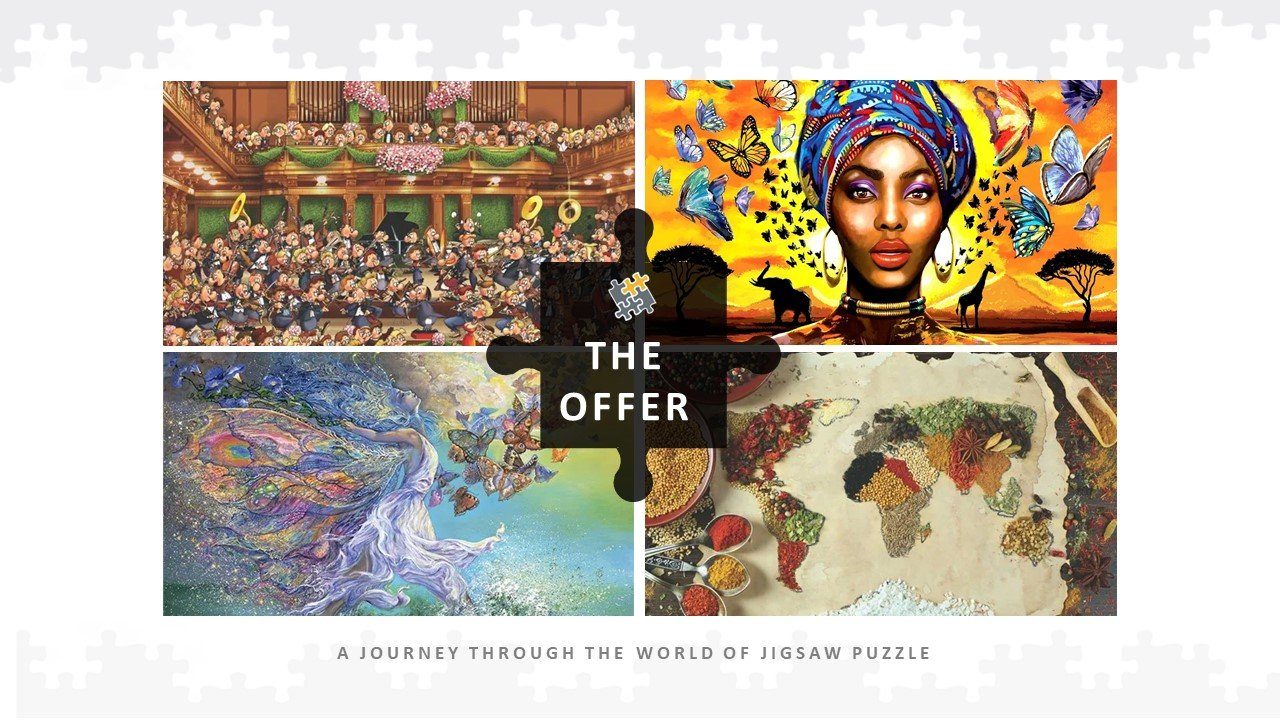 The brand offers Janelle Nichol, Jan Patrik Krasny, Tolga Artem (very colourful portraits), Aimee Stewart, and Jacek Yerka, with some of his most wanted artwork. I have to admit that there is a lot to choose from. We have animals, landscapes, maps, vehicles, marine – themes for everybody.

I admit that ‘Frida’ from the first review of this series is my personal choice of this two. But if I was to evaluate the quality, I choose AnaTolian.

Despite its slightly inferior quality, Art Puzzle doesn’t differ from many other popular brands. But less dust, better fitting of the elements, the fact that there is no uncut pieces, a bonus in the form of a box holder and finally very clear information about the complaint procedure makes me favour AnaTolian.

I know I said I wasn’t going to rate any manufacturers. But if you still want to know the score, to me it’s Art Puzzle – AnaTolian 0:1.

See you in the next entry!